We learned that the Royal Academy for Overseas Sciences has digitized the Official Bulletin of the Belgian Congo (1885-1959). The collection can be found, free of charge, here 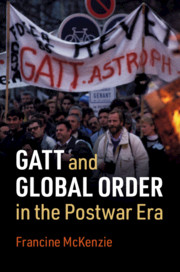 Cambridge University Press is publishing a new book on the Post-WWII trading system and its role in foreign policy and international relations.

After the Second World War, the General Agreement on Tariffs and Trade (GATT) promoted trade liberalization to help make the world prosperous and peaceful. Francine McKenzie uses case studies of the Cold War, the creation of the EEC and other regional trade agreements, development, and agriculture, to show that trade is a primary goal of foreign policy, a dominant (and divisive) aspect of international relations, and a vital component of global order. She unpacks the many ways in which trade was politicised, and the layers of meaning associated with trade; trade policies, as well as disputes about trade, communicated ideas, hopes and fears that were linked to larger questions of identity, sovereignty, and status. This study reveals how the economic and political dimensions of foreign policy and international engagement intersected, showing that trade was not only instrumentalised in the service of particular policies or relations but that it was also an essential aspect of international relations.

Francine McKenzie, University of Western Ontario
Francine McKenzie is a Professor at the University of Western Ontario. She is an international historian who has published extensively on international cooperation, trade, and global order. Her publications include Redefining the Bonds of Commonwealth, 1939-1948 (2002), A Global History of Trade and Conflict since 1500 (2013) and Dominion of Race: Rethinking Canada's International History (2017). 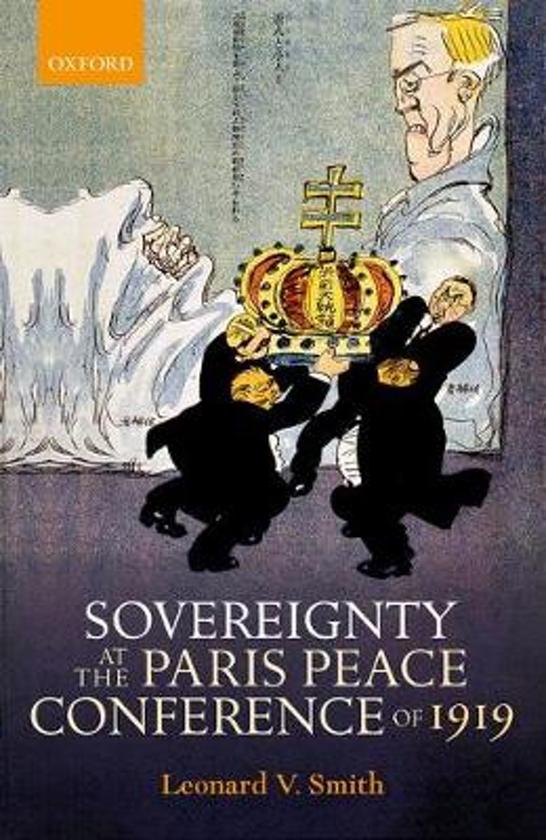 
Leonard V. Smith, an accomplished social historian of World War I, has produced a thoughtful reassessment of the Paris Peace Conference that ended the Great War. It is well researched in both primary and secondary sources, and it pays close attention to recent trends in historiography. It aims to recapture the openness (“then-ness”) of this striking moment in human affairs. Smith is himself open to international relations (IR) theory to shake up the standard historian’s view. Sovereignty at the Paris Peace Conference of 1919 provides an accurate overview of the myriad issues facing contemporary statesmen: the collapse of empires, fluid borders, population disorder, colonial redistribution, war debts, reparations, establishing an entirely new international institution (the League of Nations), etc. Among its accomplishments, the book offers a sharp assessment of the role of experts, especially political geographers in postwar boundary drawing, a spirited defense of Fridtjof Nansen and the league, who are too often blamed for severe population transfers, and a shrewd analysis of how racial categorization functioned to compromise between greedy Allied imperial states and the requirement that they administer mandates rather than simply annex former German colonies.

Oxford University Press is publishing a book on British state practice and the evolution of international maritime law from the aftermath of the Crimean War to World War I. 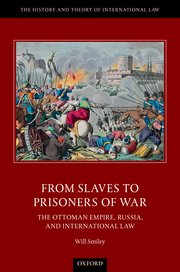 
Frederick the Great’s famous quip about the Russian-Ottoman wars as “the one-eyed fighting the blind” diminishes the significance of these titanic clashes, which unleashed mayhem upon huge populations, spread epidemic diseases, forced human migrations, and shredded territory throughout Eastern Europe and Transcaucasia. These wars determined the boundaries of modern nation-states and forged a sense of identity among millions of people. According to Will Smiley’s new book From Slaves to Prisoners of War: The Ottoman Empire, Russia, and International Law, the wars shaped the development of international law, including regulations for ransoming military captives and the trafficking of slaves, and defined subjecthood. What makes the book particularly intriguing (and its subject so difficult to research) is how the borderlands interacted with the international legal system during the eighteenth and nineteenth centuries, thus helping us understand the context in which these new international rules emerged.

Read more here and earlier on this blog. 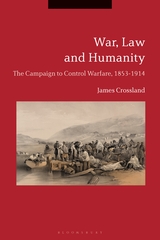 
James Crossland’s rather ambitiously titled book War, Law and Humanity: The Campaign to Control Warfare, 1853–1914 narrates the activism and agency of two dozen or so men and women in mitigating, restricting, and avoiding the violence and spread of war in the second half of the nineteenth century. Its author does so by explaining not only the agency of these individuals in developing key humanitarian causes—like the Red Cross and the United States Sanitary Commission—but also the interconnection between their agency and the development of a range of legal codes and treaties aimed at regulating warfare, like the Lieber Code (1863), the Geneva Conventions of 1864 and 1906, the Saint Petersburg Declaration of 1868, the Brussels Convention of 1874, and the Hague Conventions of 1899 and 1907. It is a highly readable book, replete with engaging anecdotes, contemporary reflections, and lively stylistic touches.

This work was announced first on 8 October 2015 on this blog, more than four years ago. It is now available in open access. 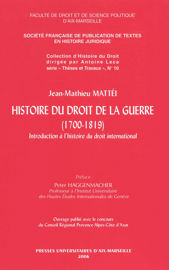 
The Natural Law Database is an open-ended, collaborative biographical and bibliographical knowledge reservoir of early modern natural law scholars from Europe and beyond. All contributions are peer-reviewed. The database is a part of the international research network Natural Law 1625-1850: An International Project and has the purpose of creating a knowledge hub, where any researcher or student easily can access and explore the world of early modern - mainly academic - natural law.
The Natural Law Database is based on the principle of collaboration and open-endedness. This means that the database project does not have a defined end-date since it is continuously expanding with new information, digitisations and expert commentaries. Since the project covers Europe (and beyond) for more than two centuries, the database also relies upon an active participation from the research community in order to grow. The populating of the database is a collaborative and international enterprise, in the sense that anyone anywhere can contribute and is encouraged to do so.


In other words, we need your help to develop the database and keep it up-to-date. For further information see How to contribute?

Springer is publishing a four-volume work on the history of conflict resolution in Europe.


In the coast, at the California-Mexico border, a rusted sheath of metal extends from the beach into the ocean, dividing the waves. There, grains of sand become attributes of different sovereignties. Two nations are brought together at this edge; at the same time, their inhabitants are marked with national identities; they come together wearing the marks of sovereignty inscribed by the border. Yet while it classifies and codifies subjects, the border cannot contain sovereignty itself. The border marks a space that American power proceeds from. 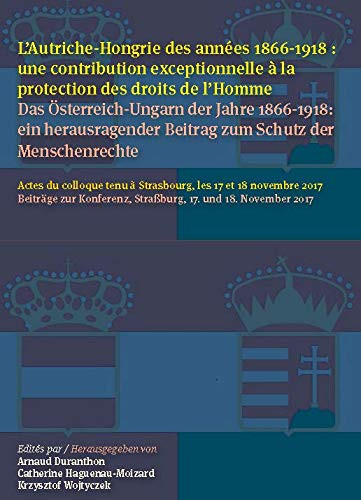 Via the Portail universitaire du droit, we learned of the publication of an edited collection on law in the Austro-Hungarian Empire (with contributions in French and German). 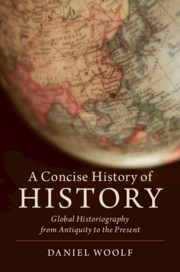 This short history of history is an ideal introduction for those studying or teaching the subject as part of courses on the historian's craft, historical theory and method, and historiography. Spanning the earliest known forms of historical writing in the ancient Near East right through to the present and covering developments in Europe, Asia, Africa and the Americas, it also touches on the latest topics and debates in the field, such as 'Big History', 'Deep History' and the impact of the electronic age. It features timelines listing major dynasties or regimes throughout the world alongside historiographical developments; guides to key thinkers and seminal historical works; further reading; a glossary of terms; and sample questions to promote further debate at the end of each chapter. This is a truly global account of the process of progressive intercultural contact that led to the hegemony of Western historiographical methods.


Daniel Woolf is Professor of History at Queen's University, Ontario. He is the author of several books, including A Global History of History (Cambridge, 2011), the award-winning The Social Circulation of the Past (2003), Reading History in Early Modern England (Cambridge, 2001), and The Idea of History in Early Stuart England (1991). He is a Fellow of the Royal Historical Society, of the Society of Antiquaries of London, and the Royal Society of Canada.µ 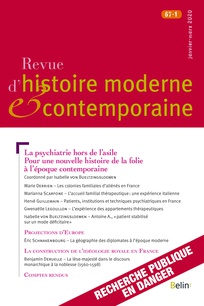 
The connection of the states of war and peace between powers in Europe and in the rest of the world was one of the greatest challenges for the early modern diplomacy. From the middle of the 16th century it was accepted that the peace treaties signed in Europe were not valid for the other parts of the world. From then, the so-called “lines of amity” introduced a partition of the worldwide space between, on the one hand, a part ruled by the commitments of the law of nations and, on the other hand, a part that would always be in a precarious situation, permanently between war and peace. In the 17th century, the express extending of the commitments of the alliances and of the peace treaties outside Europe was an important development in the practice of a real global diplomacy. But its terms and conditions were still to be defined. One of the options was to reach an agreement on the schedule of the implementation of the treaties based upon the distance with Europe. This article aims to show that the setting up of a concurrence of the states of war and peace between Europe and the rest of the world was a long process of a construction of a global diplomatic territory through the paradoxical acknowledgement of singular situations. 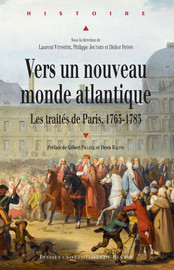 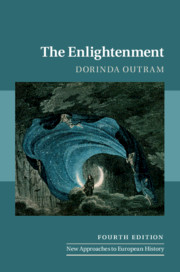 What is the Enlightenment? A period rich with debates on the nature of man, truth and the place of God, with the international circulation of ideas, people and gold. But did the Enlightenment mean the same for men and women, for rich and poor, for Europeans and non-Europeans? In this fourth edition of her acclaimed book, Dorinda Outram addresses these and other questions about the Enlightenment and its place at the foundation of modernity. Studied as a global phenomenon, Outram sets the period against broader social changes, touching on how historical interpretations of the Enlightenment continue to transform in response to contemporary socio-economic trends. Supported by a wide-ranging selection of documents online, this new edition provides an up-to-date overview of the main themes of the period and benefits from an expanded treatment of political economy and imperialism, making it essential reading for students of eighteenth-century history and philosophy.


Dorinda Outram is Clark Professor Emerita of History at the University of Rochester, New York. Her previous publications include Georges Cuvier: Vocation, Science and Authority in Post-Revolutionary France (1982), Uneasy Careers and Intimate Lives: Women in Science, 1789–1979 (1988) and The Body and the French Revolution: Sex, Class and Political Culture (1989).

For some time now, historians have been venturing well beyond the spatial and methodological enclosures of nation-states that had long defined the modern discipline, writing more history that is variously described as international, transnational, transregional, global, or world history.1 This essay sets out to examine one aspect of the turn away from methodological nationalism—which is the assumption that the nation-state is the natural frame for the study of history—an aspect that has often been described as the emergence of a “new international history.”2 The term “international history” has had a rather complicated history in the U.S. historical profession,