NOTICE: The Peace Palace Library and the History of International Law 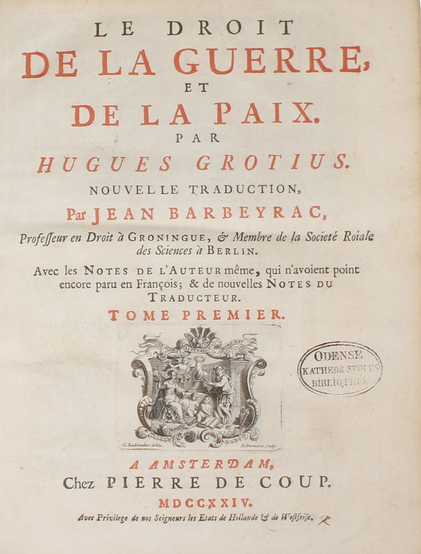 The excellent website of the Peace Palace Library (The Hague) posted three messages relevant for the history of international law:

We received the following Call for Papers:


If the Austro-Hungarian empire gave way to a new order of nation-states at the end of the First World War, the birth of that order coincided with a broader new international settlement with the League of Nations at its heart. In light of new literature on the relationship between empire and international order, as well as on the relationship between regional and international orders, this workshop will examine the interaction of the League of Nations and its sister organizations, like the ILO, with the former Habsburg lands. Across a range of economic, social, political, and legal domains, international institutions shaped and guaranteed the new order in Central Europe. At the same time, statesmen, bureaucrats and experts from the successor states embarked on influential careers in the new organizations.


Considering the passive involvement of the monarchy with the new internationalism of the late nineteenth and early twentieth century, as well as the empire’s own legacies of supranational organization, we intend to explore the networks of influence that bound the successor states to the institutions of the interwar order. To what extent were those interactions inflected by imperial pasts? Were some successor states more active participants in those institutions than others? In which ways and on which occasions did the League and the successor states offer each other political opportunities?

The call for papers for this workshop is now open. If you would like to apply please submit a paper abstract of around 200 words by the end of January 2015 to peter.becker@univie.ac.at or ngw2103@columbia.edu. We are particularly (but not exclusively) interested in the following themes:


The workshop is convened by Peter Becker (Vienna) and Natasha Wheatley (New York/Sydney). It is a joint venture between the Austrian Institute of Historical Research, Vienna, and the Laureate Research Program in International History, University of Sydney, and will take place at the University of Vienna from December 11-12, 2015. Accommodation will be provided for those applicants, whose papers have been accepted, and travel subsidies will also be available.

(Pope Urbanus II calls for the First Crusade at the Council of Clermont, 1095)

The French radio station France Culture broadcasted an episode of Jean-Noël Jeanneney's Concordance des Temps around the just war doctrine in medieval canon law and theology. Since the roots of present-day jus ad bellum lie in christian doctrine, the ESILHIL-blog thought this of sufficient interest to our members and readers. Jeanneney, former president of the Bibliothèque nationale de France, professor at Sciences Po Paris and former Secretary of State under François Mitterrand, invited medievist André Vauchez, member of the Institut de France and the Académie des inscriptions et des belles lettres, to discuss the Church's role as an actor in international relations and as a lawmaker. An erudite conversation on the (im)possible morality of the use of force, proportionality,  auctoritas, recta intentio, causa justa and sovereignty.

Please find our call below:

On the occasion of The ESIL 11th Annual Conference, to be held in Oslo, 10 – 12 September 2015 (The Judicialization of International Law – A Mixed Blessing?'), the ESIL’s interest group on the History of International Law http://esilhil.blogspot.co.uk/ invites submissions, in English or French.

Authors are invited to consider factors of failure/success in the creation, disappearance or non- emergence of international courts and tribunals in light of their legitimacy of origin and exercise as well as other factors. These may include, but are not limited to e.g. the role of particularly inspirational figures or social movements, the contextual-historical relevance of different international legal philosophies or the impact of context-breaking events in the history of international law.

Each submission should include:
– An abstract of no more than 400 words
– The intended language of presentation
– A short curriculum vitae containing the author’s name, institutional affiliation, contact information and e-mail address.

Applications should be submitted to both Ignacio de la Rasilla del Moral and Randall Lesaffer by 15th February 2015. All applicants will be notified of the outcome of the selection process by 15th March 2015.

Selection will be based on scholarly merit and with regard to producing an engaging workshop, without prejudice to gender, seniority, language or geographical location. Please note that the ESIL Interest Group on the History of International Law is unable to provide funds to cover the conference registration fee or related transport and accommodation costs.

The best papers would be eligible for publication in a "symposium" of the Journal of the History of International Law (Brill/Martinus Nijhoff - MPI Heidelberg).