Private International Law is often criticized for failing to curb private power in the transnational realm. The field appears disinterested or powerless in addressing global economic and social inequality. Scholars have frequently blamed this failure on the separation between private and public international law at the end of the nineteenth century and on private international law's increasing alignment with private law.

Through a contextual historical analysis, Roxana Banu questions these premises. By reviewing a broad range of scholarship from six jurisdictions (the United States, France, Germany, the United Kingdom, Italy, and the Netherlands) she shows that far from injecting an impetus for social justice, the alignment between private and public international law introduced much of private international law's formalism and neutrality. She also uncovers various nineteenth century private law theories that portrayed a social, relationally constituted image of the transnational agent, thus contesting both individualistic and state-centric premises for regulating cross-border inter-personal relations.

Overall, this study argues that the inherited shortcomings of contemporary private international law stem more from the incorporation of nineteenth century theories of sovereignty and state rights than from theoretical premises of private law. In turn, by reconsidering the relational premises of the nineteenth century private law perspectives discussed in this book, Banu contends that private international law could take centre stage in efforts to increase social and economic equality by fostering individual agency and social responsibility in the transnational realm. 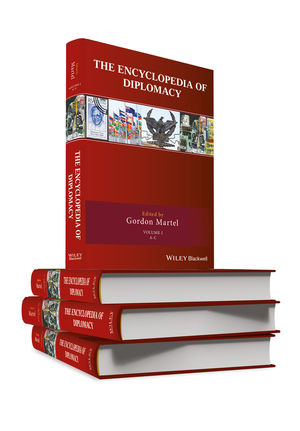 
GORDON MARTEL is Emeritus Professor of History at the University of Northern British Columbia and Adjunct Professor at the University of Victoria. He has written widely on the history of diplomacy, international relations, and modern war. Among his best-known works are Imperial Diplomacy (1985) and The Origins of the First World War (fourth edition, 2008). He was one of the founding editors of the leading scholarly journal in the field, The International History Review, and is editor of "Seminar Studies in History". He has edited numerous scholarly publications including The World War Two Reader (2004), A Companion to Europe, 1900-1945 (Wiley Blackwell, 2006), A Companion to International History, 1900-2001 (Wiley Blackwell, 2007), and The Encyclopedia of War (Wiley Blackwell, 2011).

The Faculty of Law and Criminology of the Vrije Universiteit Brussel (VUB) advertises a position for an Academic Assistant (100%) in International and European Law, charged with teaching (40%) and research (60%) assignments. Starting date 1 October 2018.

The National Archives, the Foreign and Commonwealth Office Historians, the University of Strathclyde, the International History Department at the London School of Economics and Political Science, and the British International History Group invite submissions for the upcoming conference ‘Peace making after the First World War 1919 – 1923’.
Taking place from Thursday 27 to Friday 28 June 2019, the first day of the conference will be held at The National Archives and includes a keynote lecture by Professor David Stevenson. The second day of the conference will be hosted by the Foreign and Commonwealth Office Historians at Lancaster House, and will see a range of experts speak on aspects of the peace making process followed by a round table discussion.
Dr Juliette Desplat, Head of Modern Overseas, Intelligence and Security, at The National Archives said:
‘The conference aims to focus not only on the Treaty of Versailles, but also on the other treaties that marked the formal end of hostilities: Saint-Germain (Austria), Neuilly (Bulgaria), Trianon (Hungary), Sèvres (Ottoman Empire) and Lausanne (Turkey).
‘We are delighted that, as part of this, the conference will include an exhibition of The National Archives’ unique collection of certified copies of all the treaties, alongside a selection of other materials.’
Submissions are invited for 20-minute papers, or panels of three papers, to be presented on the first day of the conference, on any aspect of the peace making process. Abstracts should be submitted by Saturday 1 December. See full details of the call for papers.
Join the conversation on social media #PeaceConf

Via Hi-D, we learned of a Call for Papers for a colloquium on war damages and state responsibility in the context of the aftermath of World War I. 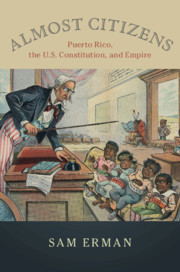 Via the American Society for Legal History, we learned of a new forthcoming book (November 2018) in their “Studies in Legal History” series. The book deals with the US annexation of Puerto Rico in 1898 and the imperial governance issues this created. The book can be pre-ordered here

Almost Citizens lays out the tragic story of how the United States denied Puerto Ricans full citizenship following annexation of the island in 1898. As America became an overseas empire, a handful of remarkable Puerto Ricans debated with US legislators, presidents, judges, and others over who was a citizen and what citizenship meant. This struggle caused a fundamental shift in constitution law: away from the post-Civil War regime of citizenship, rights, and statehood and toward doctrines that accommodated racist imperial governance. Erman's gripping account shows how, in the wake of the Spanish-American War, administrators, lawmakers, and presidents together with judges deployed creativity and ambiguity to transform constitutional meaning for a quarter of a century. The result is a history in which the United States and Latin America, Reconstruction and empire, and law and bureaucracy intertwine.

Introduction
1. 1898: 'The constitutional lion in the path'
2. The Constitution and the new US expansion: debating the status of the Islands
3. 'We are naturally Americans': Federico Degetau and Santiago Iglesias pursue citizenship
4. 'American aliens': Isabel Gonzalez, Domingo Collazo, Federico Degetau, and the Supreme Court, 1902–1905
5. Reconstructing Puerto Rico, 1904–1909
6. The Jones Act and the long path to collective naturalization
Conclusion.


Westerners applied multiple normative frameworks in debating policy toward China in the wake of the Boxer Uprising in 1900 and 1901. They variously claimed that treatment of China should be governed by the rules of international law, a code of honor, Christian teachings, the judgment of history, or ill-defined norms of civilization. At other times, however, Westerners called for violence against the Chinese without any meaningful normative basis. The law and the legal discipline have an imperializing character, as the law conceptually tends to subordinate other normative frameworks to itself and integrate them into its own normative order, dubbed law. The debate concerning China in 1900 illustrates that legal norms were inextricably and complexly entangled with other norms. It suggests that legal historians, if they are to grasp the past in its full richness, should attend to multiple normative frameworks beyond the law, since legal history cannot be divorced from its wider context. Moreover, scholars applying the lens of multinormativity should recognize that, at some point, norms end and a-normative arguments begin. 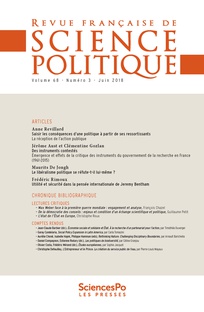 La Fabrique de l'Histoire, the emblematic history podcast of France Culture, terminates its 2017-2018 season with a special broadcast on the atypical end of the Great War, with Professors John Horn (UC Dublin) and Anne Lehoërff (Lille).

The Institut d'histoire du droit of the University of Poitiers organises a one-day conference on the theme Après la guerre.


Drawing on the practice-turn in constructivism and in international relations (IR) theory more generally, our interactional law framework provides a counterpoint to the largely static accounts of international law that still prevail in the interdisciplinary literature. We argue that a particular approach to managing stability and change is inherent in, and indeed characteristic of, legality and the rule of law in international as in domestic law. Therefore, to get at law’s distinctiveness, and to understand the specifically legal interplay between stability and change, one must examine law’s internal structure. Furthermore, legality must actually be practiced. For example, the conclusion of a treaty is often just the beginning of a long law-building process – the document alone ensures neither stability nor change in law. Finally, a focus on internal traits and practices of legality allows full consideration of the formal sources of international law as well as the so-called soft norms that are shaping international interaction involving an ever-wider range of actors. Our “interactional law” framework places particular emphasis on what we call the “practice of legality.” We argue that this concept is central to understanding how law can both enable and constrain state actions, and why international law is a distinctive language of justification and contestation. In turn, the focus on stability and change is helpful because it directly confronts some of the persistent doubts and assumptions about international law, in particular in relation to international politics. Our work is animated by the intuition that the dominant views in IR and international law scholarship underestimate international law’s capacity to mediate stability and change, in part because they focus on the surface of law (treaties, statutes etc.) and external factors (interests, enforcement). They neglect the deeper structure of what makes norms law, and the distinctive practices that account for its relative stability and its capacity for change.

ARTICLE: Nineteenth Century Arbitrators’ Powers—Has There Been Any Progress to Date? The Law & Practice of International Courts and Tribunals XVII (2018), Nr. 1, 217-235


Investment arbitrators’ authority has been a focus of attention today, e.g. regarding the extent of their powers to interpret and apply the law, to conduct arbitral proceedings, to dissent from their fellow co-arbitrators, and with regard to their duty to be impartial and independent. Two hundred years ago, practitioners, arbitrators and states confronted similar challenges, and through legal doctrines, treaties and practices a path was laid out for future generations of practitioners and arbitrators, where clear legal lines were drawn to distinguish between arbitrators’ procedural and substantive powers and their duties with regard to each of them. The consent and sovereignty of states were duly deferred to by arbitrators and umpires, limiting their job to settle a case. Thus, arbitrators had the duty of impartially interpreting and applying the law of nations, i.e. the natural law, and to deliver a final and binding award. Arbitrators were not bound by precedents, and if they made an unjust or unfair decision, beyond the law, countries could refrain from complying with it, which limited arbitrators’ interpretive powers. In conclusion, not much has changed to date with regard to the procedural powers given to arbitrators. The authority delegated to them by states was to strictly settle the case; no power to develop the law was ever given, which still applies now. Hence, the only important change that has been introduced today is that of claiming the so-called inherent power to help in the development of investment law, which is being driven mainly by arbitrators, and not by states. 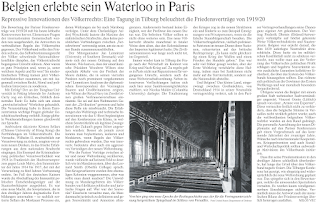 Prof. dr. Miloš Vec (Univ. Vienna/IMW) published a conference report on the JHIL symposium "The Parisian Peace Treaties (1919-1920) and the emergence of modern international law (see earlier on this blog). The text appears in today's Frankfurter Allgemeine Zeitung, nr. 152, p. 3 and can be read here above, by clicking on the image.
Gepost door Frederik Dhondt op 16:42