The Past is Prologue: The Impact of Law’s History : A New Edited Collection of Essays on Legal History
The Book.

Legal rules, decisions, institutions, and individual actors have had an enormous impact on our cultures and societies today. The leaders that govern us, the crimes that are committed, and the freedoms that we cherish are part and parcel of the enduring legacy of legal history. Despite its diminishing presence in legal education in recent decades, the study of legal history is on an upswing as its importance gains renewed recognition. The availability of new techniques and resources allow scholars to develop new insights and supplement, contextualise, or challenge our previous understandings of the causes and consequences of developments in law and society.
We are assembling a special collection of essays that consider how legal history in Aboriginal, British, Australian, American or wider contexts have shaped our shared present. The essays in this collection will be more than just discussions of particular aspects of legal history in the abstract; instead, each will draw a clear and significant connection to a meaningful feature of our lives today. With this Call for Papers, we are now soliciting contributions from the academy and members of the public more generally.

This edited collection will be initially offered to an Australian academic press.  Please submit an abstract of up to 250 words explaining the focus and approach your proposed essay would take to ensure appropriate academic rigour. The proposed volume is intended to be scholarly but accessible in tone and approach. Each contribution should be in the area of 6000 to 10000 words. Please email abstracts to marcus.harmes@usq.edu.au by 30 September 2019.

The 43rd edition of the Deutscher Rechtshistorikertag will be in Zürich from 7-11 September 2020. A special section is devoted to the history of international law ("Völkerrechtsgeschichte"). Territorial Sovereignty: A Philosophical Exploration offers a qualified defense of a territorial states-system. It argues that three core values-occupancy, basic justice, and collective self-determination-are served by an international system made up of self-governing, spatially defined political units. The defense is qualified because the book does not actually justify all the sovereignty rights states currently claim, and that are recognized in international law. Instead, the book proposes important changes to states' sovereign prerogatives, particularly with respect to internal autonomy for political minorities, immigration, and natural resources. Part I of the book argues for a right of occupancy, holding that a legitimate function of the international system is to specify and protect people's preinstitutional claims to specific geographical places. Part II turns to the question of how a state might acquire legitimate jurisdiction over a population of occupants. It argues that the state will have a right to rule a population and its territory if it satisfies conditions of basic justice and also facilitates its people's collective self-determination. Finally, Parts III and IV of this book argue that the exclusionary sovereignty rights to control over borders and natural resources that can plausibly be justified on the basis of the three core values are more limited than has traditionally been thought. 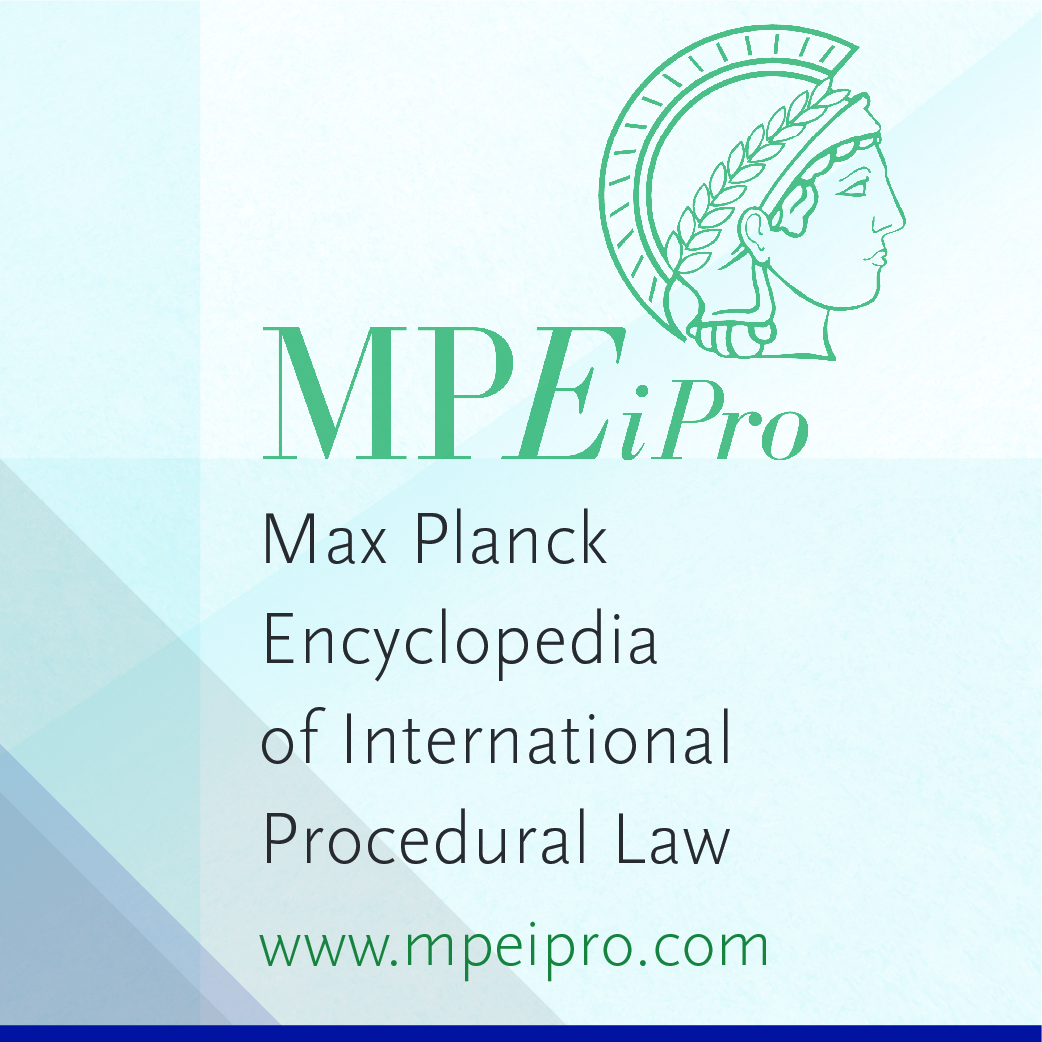 Launching on 5 September 2019, this new module will sit alongside the existing Max Planck Encyclopedia of Public International Law (MPEPIL) as part of the relaunched Max Planck Encyclopedias of International Law (MPIL). The Max Planck Encyclopedia of International Procedural Law (MPEiPro) will map and analyze the systems and processes through which international law is made and adjudicated in practice. Each article is commissioned by General Editor Professor Hélène Ruiz Fabri and a team of experts at the Max Planck Institute Luxembourg for Procedural Law, providing cutting-edge and rigorously peer-reviewed research on areas of international law that are often under-explored. MPEiPro will take a broad view of international procedure, examining it from three different angles: technical points of procedure within specific institutions or across similar organizations; comparative accounts of families of institutions within specific subject areas or with similar functions; and theoretical, interdisciplinary entries. The scope of the Encyclopedia will mirror the broad understanding of procedure underlying it, encompassing decision-making by international organs in general, including political and administrative bodies. At launch, the Encyclopedia will cover dispute settlement and adjudication. Coverage of non-adjudicatory modes of dispute settlement such as negotiation, mediation, and conciliation, as well as international political and administrative procedures will be added over time. The Encyclopedia will eventually contain over 1000 entries.

BOOK REVIEW: Joshua SMELTZER, Carl Schmitt In and Out of History (LSE Review of Books) 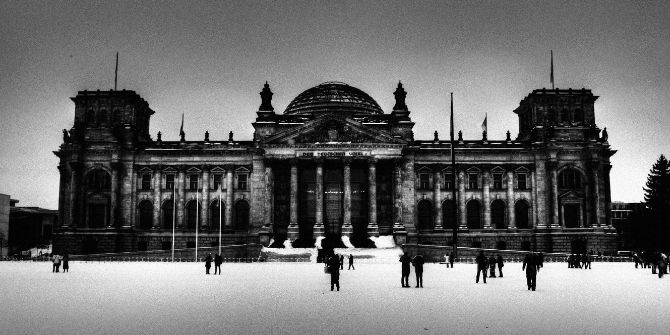 
In this long read, Joshua Smeltzer reviews two recent books that return to the works of infamous political and legal theorist Carl Schmitt, Perilous Futures: On Carl Schmitt’s Late Writings by Peter Uwe Hohendahl and Carl Schmitt’s State and Constitutional Theory: A Critical Analysis by Benjamin Schupmann. In the piece, Smeltzer reflects on some of the methodological challenges of studying Schmitt’s work in historical context, questions scholarly attempts to rehabilitate Schmitt as a liberal state theorist given his close involvement with Nazism and calls for greater attention on other protagonists in the intellectual history of German democracy.


What do intellectual historians currently investigate? And why is this relevant for us today? These are some of the questions our podcast series, led by graduate students at Cambridge, seeks to explore. It aims to introduce intellectual historians and their work to everyone with an interest in history and politics. Do join in on our conversations!

This edited collection offers a reassessment of the complicated legacy of Emer de Vattel’s Droit des gens, first published in 1758. One of the most influential books in the history of international law and a major reference point in the fields of international relations theory and political thought, this book played a role in the transformation of diplomatic practice in the eighteenth and nineteenth century. But how did Vattel’s legacy take shape? The volume argues that the enduring relevance of Vattel’s Droit des gens cannot be explained in terms of doctrines and academic disciplines that formed in the late nineteenth and twentieth centuries. Instead, the chapters show how the complex reception of this book took shape historically and why it had such a wide geographical and disciplinary appeal until well into the twentieth century. The volume charts its reception through translations, intellectual, ideological and political appropriations as well as new practical usages, and explores Vattel’s discursive and conceptual innovations. Drawing on a wide range of sources, such as archive memoranda and diplomatic correspondences, this volume offers new perspectives on the book’s historical contexts and cultures of reception, moving past the usual approach of focusing primarily on the text. In doing so, this edited collection forms a major contribution to this new direction of study in intellectual history in general and Vattel’s Droit des gens in particular.

“A Poor Imitation of Grotius and Pufendorf?” Biographical Uncertainties and the Laborious Genesis of Vattel’s Droit des gens
(Frédéric Ieva)

The Citizen’s Right to Leave His Country: The Concept of Exile in Vattel’s Droit des gens
(Alberto Carrera)

The Foundations of Vattel’s “System” of Politics and the Context of the Seven Years’ War: Moral Philosophy, Luxury and the Constitutional Commercial State
(Koen Stapelbroek)

‘Good Government’ and the Tradition of Small States: The Eighteenth- and Nineteenth-Century Reception of the Droit des gens
(Antonio Trampus)

Vattel in the Republic of Genoa: Between Theory and Practice
(Danilo Pedemonte)

Vattel in the Papal States: The Law of Nations and Anti-Prussian Propaganda in Italy at the Time of the Seven Years’ War
(Alberto Clerici)

Vattel’s System for Subjects in International Law, and the Establishment of Norway as a Nation in 1814
(Gert-Fredrik Malt)