OPEN ACCESS ARTICLE: Daniel S. ALLEMANN, "Empire and the Right to Preach the Gospel in the School of Salamanca, 1535-1600", Historical Journal 2018 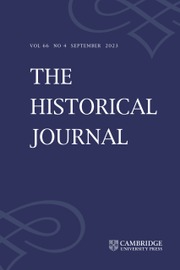 The Historical Journal published an article in open access by Daniel S. Allemann (Gonville & Caius College, Cambridge) on "Empire and the Right to Preach the Gospel in the School of Salamanca".


The sixteenth-century theologians of the School of Salamanca are well known for their sophisticated reflections on the Spanish conquest of the New World. But the nature of their responses seems far from clear and is subject to historiographical debate. Recent studies from the discipline of intellectual history suggest that the Salmantine theologians challenged the legitimacy of Spanish claims to the Americas. Scholars associated with the field of post-colonial studies, on the other hand, forcefully stress their entanglement in Spain's imperial venture overseas. This article, however, argues that these seemingly irreconcilable approaches are not in fact mutually exclusive. It shifts our attention to the sorely neglected ius praedicandi, the right to preach the gospel, which served to translate the Spanish theologians’ deeply rooted belief in the hegemonic truth of the Christian faith into a discourse of otherwise ‘secular’ natural rights. In adopting this novel lens, the article makes a case for assessing the language of the university theologians in its own terms while simultaneously exposing the support of Salamanca for Spain's imperial venture.