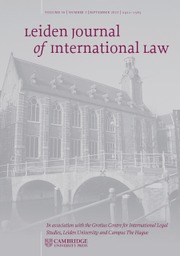 
In deciding whether to rule against a state party, international courts regularly confront a compliance dilemma: declare the state in breach of the international regime but with the risk that it will defy the court’s authority; or defer to the state but at the price of acquiescing to an unjust or undesirable outcome. Specifically, international adjudicators must solve this dilemma in a context of uncertainty, that is, without knowing with exactitude whether or not the state will prefer complying with an adverse ruling over overt defiance. I use a simple strategic model to cast light on this aspect of the compliance dilemma. Building off from the model’s insights, I then discuss the practices, doctrinal tactics and institutional mechanisms apt to reduce uncertainty and minimize state defiance. I highlight, in particular, the advantages of defiance avoidance mechanisms that help create informational feedback loops like test-the-water dicta and double-tier review. I illustrate how these mechanisms have been deployed by two of the world’s most powerful international courts, the European Court of Justice and the European Court of Human Rights. Finally, I consider the limitations of these mechanisms along with the possibility for other international dispute settlement bodies to replicate them.


Nearly three decades after the Cold War, the present-day hostilities between India and Pakistan have shifted the focus of the threat of nuclear escalation to South Asia. It is in this context that this article seeks to assess the legality of India’s military nuclear doctrine under international law. Academic literature on the use of nuclear weapons has largely shied away from discussing the legality of specific military doctrines or ‘policies of deterrence’ of the nuclear weapon states, treating them as issues of military strategy that are beyond the realm of international law. This article hopes to challenge that dichotomy. Though several branches of international law are relevant to any discussion on nuclear weapons, this article shall only examine India’s nuclear doctrine through the lens of jus ad bellum. Specifically, this article shall focus on whether India’s nuclear doctrine constitutes a threat to use force, and if so, whether such threat is lawful. The article concludes that India’s nuclear doctrine can be construed to be a specific threat to use force against Pakistan, and that such threat may be unlawful for contemplating the disproportionate use of force.


Within international institutions such as the International Criminal Court (ICC), lawyers increasingly encounter managerial practices which are designed to improve organizational efficiency and cost-effectiveness. Charting this trend, scholars have analyzed these practices with a view to make them more legitimate. However, this scholarly focus overlooks the role of managerial practices in legitimizing and thus sustaining the institutions in which they are embedded. In this article, I ask how managerial practices operate to boost the ICC’s reputation among its global audience. I find the answer in the Court’s use of the juxtaposed images of bureaucracy and management, with all their negative and positive associations. The Court uses these images to narrate a story of its own internal evolution from inefficient bureaucracy to efficient and well-managed organization. This hidden narrative of institutional progress functions rhetorically to frame, focus and distract the attention of the Court’s global constituencies.


In recent years, the academic field of international institutional law has taken a clear ‘constitutional’ turn. In this normative endeavour, liberal ‘rule of law’ ideals are being reinvigorated, translated and projected onto international organizations. This article trades this well-trodden path for a socio-legal inquiry into how the ‘rule of law’ is produced, practiced and performed in the everyday political and operational life of one specific international organization (the World Bank) during one contentious historical episode. To grasp what it means for ‘law to rule’, I argue, we need to expand our archives to the daily praxis of legality: the actors that embody it; the consciousness that drives it; the politics that rely on it; and the fragile institutional balances that give it meaning. Grounded in this pragmatist perspective, I retrace the intervention of legal expertise during the Bank’s turn to state reform in the wake of the Cold War. Descending from principles to practices, from norms to acts, from abstract heights to situated performances, the article not only strives for an enhanced understanding of the ‘rule of law’ within the World Bank, but also aims at a critical methodological intervention in the field of international institutional law.

Erika de Wet, "The invocation of the right to self-defence in response to armed attacks conducted by armed groups: Implications for attribution"
Abstract:


The right to self-defence in Article 51 of the United Nations Charter is increasingly being invoked in response to armed attacks conducted by armed groups located in a territory of another state, with or without the (direct) assistance of such a state. This article examines the implications of the invocation of the right to self-defence under these circumstances for the principles of attribution within the jus ad bellum paradigm. First, it illuminates how the threshold requirements for indirect armed attacks (that is, the state acting through a private actor) have been lowered since the 1986 Nicaragua decision of the International Court of Justice. In so doing, the article suggests that in order to prevent a complete erosion of the benchmarks of an indirect armed attack, the notions of ‘substantial involvement’ in an armed attack, ‘harbouring’, and ‘unwillingness’ should be interpreted as manifestations of due diligence. Thereafter, the article illustrates that there is also an increasing attribution of armed attacks directly to non-state actors, notably those located in areas over which territorial states have lost control. Such states could be depicted as being ‘unable’ to counter the activities of non-state actors. The article further submits that particularly in these instances, the principle of necessity within the self-defence paradigm can play an important role in curbing the potential for abuse inherent in the vague notion of ‘inability’, if interpreted in light of Article 25 of the Articles on State Responsibility for Internationally Wrongful Acts.


In the summer of 2017, the International Law Commission adopted a draft article on exceptions to immunity. The Draft Article adopted provides that immunity ratione materiae does not apply with respect to certain international crimes, namely crimes against humanity, the crime of genocide, war crimes, the crime of apartheid, torture, and enforced disappearances. These exceptions do not apply to immunity ratione personae. The Draft Article was adopted after a vote and was severely criticized by some members of the Commission. It has also received mixed reaction from states, with some supporting its content while others have opposed it. In the aftermath of the adoption of the Draft Article, there has also been academic commentary, some of which has been critical. The (main) criticism levelled against the Draft Article is that it does not represent existing law and has no basis in the practice of states. This article seeks to evaluate the criticism by considering whether there is any state practice in support of the Draft Article proposed by the Commission.


This article concentrates on a particular controversy during the 2014 Ebola outbreak in West Africa; the mass cancellation of flights to and from affected countries. This occurred despite authoritative advice against such restrictions from the World Health Organization (WHO). During a public health emergency such as Ebola, the airplane sits at a site of regulatory uncertainty as it falls within the scope of two specialist and overlapping domains of international law; the WHO International Health Regulations (2005) and the Convention on International Civil Aviation. We explore how legal technicalities and objects, by promoting functional interactions between these two specialized regimes of law, were utilized to deal with this uncertainty. We show how the form and function of these mundane tools had a significant impact; assimilating aviation further into the system of global health security as well as instrumentalizing the aircraft as a tool of disease surveillance. This encounter of regimes was law creating, resulting in new international protocols and standards designed to enable the resumption of flights in and out of countries affected by outbreaks. This article therefore offers significant and original insights into the hidden work performed by legal techniques and tools in dealing with regime overlap. Our findings contribute to the wider international law literature on fragmentation and enrich our understanding of the significance of relational regime interactions in international law.


This article establishes the normative connection between Japan’s responses to regional hegemonic order prior to the nineteenth century and its subsequent engagement with the European standard of civilization. I argue that the Japanese understanding of the ‘standard of civilization’ in the nineteenth century was informed by the historical pattern of its responses to hegemony and the discourse on cultural superiority in the Far East that shifted from Sinocentrism to the unbroken Imperial lineage to the national-spirit. Although Japanese scholars accepted and engaged with the European standard of civilization after the forced opening up of Japan to the Western world in the mid-nineteenth century, they did so for instrumental purposes and soon translated ‘civilization’ into a language of imperialism to reassert supremacy in the region. Through intellectual historiography, this narrative contextualizes Japan’s engagement with the European standard of civilization, and offers an analytical framework not only to go beyond Eurocentrism but also to identify various other loci of hegemony, which are connected through the same language of power.