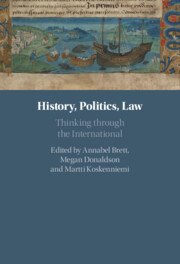 Historians of political thought and international lawyers have both expanded their interest in the formation of the present global order. History, Politics, Law is the first express encounter between the two disciplines, juxtaposing their perspectives on questions of method and substance. The essays throw light on their approaches to the role of politics and the political in the history of the world beyond the single polity. They discuss the contrast between practice and theory as well as the role of conceptual and contextual analyses in both fields. Specific themes raised for both disciplines include statehood, empires and the role of international institutions, as well as the roles of economics, innovation and gender. The result is a vibrant cross-section of contrasts and parallels between the methods and practices of the two disciplines, demonstrating the many ways in which both can learn from each other.

Annabel Brett, University of Cambridge Annabel Brett is a leading historian of late medieval and early modern political thought, with a particular interest in natural law and the law of nations. She is the author of Liberty, Right and Nature: Individual Rights in Later Scholastic Thought (1997) and Changes of State: Nature and the Limits of the City in Early Modern Natural Law (2011).  Martti Koskenniemi is a leading critical scholar of the theory and history of international law. His works are studied by lawyers, historians and international relations scholars across the world. He has held visiting professorships at many of world's leading universities, is Corresponding Fellow of the British Academy, and a Member of the American Academy of Arts and Sciences. Martti Koskenniemi, University of Helsinki Megan Donaldson, University College London Megan Donaldson has published on nineteenth and twentieth-century shifts in treaty-making, statehood and international organisations. Her forthcoming monograph traces the evolution of secrecy in the international legal order.