ONLINE SEMINAR: Transatlantic Roundtable to Launch the Oxford Handbook of Gender, War, and the Western World since 1600 (University of North Carolina; 5 MAR 2021) 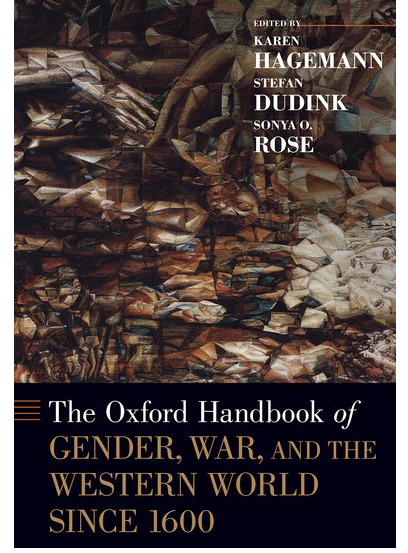 This transatlantic roundtable launches the publication of The Oxford Handbook of Gender, War, and the Western World since 1600 , a comprehensive historical overview of the entangled relationships between gender, war and military culture, and remembers one of its three editors, Sonya O. Rose (1935-2020), who sadly died weeks before the book was published.

The roundtable will focus on the intersection of gender, war and citizenship, which is not only one of the major themes of the Oxford Handbook, but also of Sonya Rose’s work. It starts from her suggestion, to think of citizenship as ‘’a framework that serves as a basis for claims-making.” Citizenship, she wrote, is a discursive framework that enables people to make various political and other claims and shapes political subjectivities that get enacted in the process of claims-making. Deeply marked by gender, race and class, this framework of citizenship produces exclusions—and offers tools to contest these. War often comes with a particularly intense discourse and politics of citizenships, in which claims made by, and on, people get linked to the issue of national survival. The roundtable will explore the politics of citizenship in the context of military and war and ask how transformations of modern warfare have affected notions of citizenship and gender, and vice versa how historical and changing notions of citizenship and gender shaped military and war.

The participants of the roundtable will explore the wartime politics of citizenship in various historical and geographical contexts, ranging from late eighteenth-century Wars of Revolution and Independence to Word War II. Three sets of questions are central to their exploration: