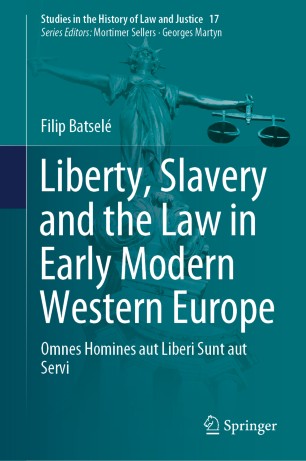 This book investigates the legal evolution of the “free soil principle” in England, France and the Low Countries during the Early Modern period (ca. 1500–1800), which essentially stated that, as soon as slaves entered a certain country, they would immediately gain their freedom. This book synthesizes the existing literature on the origins and evolution of the principle, adds new insights by drawing on previously undiscussed primary sources on the development of free soil in the Low Countries and employs a pan-Western, European and comparative approach to identify and explain the differences and similarities in the application of this principle in France, England and the Low Countries. Divided into four sections, the book begins with a brief introduction to the subject matter, putting it in its historical context. Slavery is legally defined, using the established international law definition, and both the status of slavery in Europe before the Early Modern Period and the Atlantic slave trade are discussed. Secondly, the book assesses the legal origins of the free soil principle in England, France and the Low Countries during the period 1500–1650 and discusses the legal repercussions of slaves coming to England, France and the Low Countries from other countries, where the institution was legally recognized. Thirdly, it addresses the further development of the free soil principle during the period 1650–1800. In the fourth and last section, the book uses the insights gained to provide a pan-Western, European and comparative perspective on the origins and application of the free soil principle in Western Europe. In this regard, it compares the origins of free soil for the respective countries discussed, as well as its application during the heyday of the Atlantic slave trade. This perspective makes it possible to explain some of the divergences in approaches between the countries examined and represents the first-ever full-scale country comparison on this subject in a book.


Introduction
The Legal and Institutional Framework of Slavery
The Development of a Legal Freedom Principle, Ca. 1500–1650
England Ca. 1650–1800: Neither Emancipated nor Fully Enslaved
Strains on French Freedom: Turks and Nègres in Metropolitan France
The United Provinces: Abandoning the Freedom Principle Sub Silentio(?)
A Legal Comparison of the Freedom Principle—Similarities and Differences
General Conclusion—The Soil of Europe: Free or Unfree?