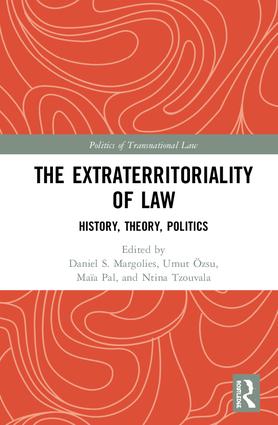 Routledge is publishing a new book dealing i.a. with the history of legal extraterritoriality.

This book brings together thirteen scholars of law, history, and politics in order to reconsider the history, theory, and contemporary relevance of legal extraterritoriality. Situating questions of extraterritoriality in a set of broader investigations into state-building, imperialist rivalry, capitalist expansion, and human rights protection, it tracks the multiple meanings and functions of a distinct and far-reaching mode of legal authority. The fundamental aim of the volume is to examine the different geographical contexts in which extraterritorial regimes have developed, the political and economic pressures in response to which such regimes have grown, the highly uneven distributions of extraterritorial privilege that have resulted from these processes, and the complex theoretical quandaries to which this type of privilege has given rise.

The book will be of considerable interest to scholars in law, history, political science, socio-legal studies, international relations, and legal geography.

Daniel S. Margolies is Professor and Chair of the History Department at Virginia Wesleyan University, US