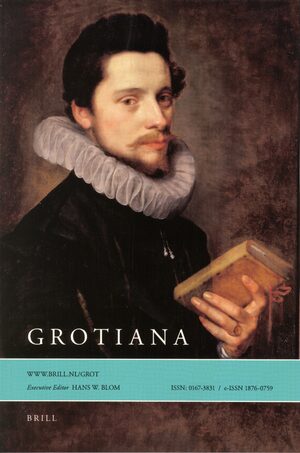 Grotius on the Use of Force: Perfect, Imperfect and Civil Wars. An Introduction (Randall Lesaffer) (OPEN ACCESS)

In both of Hugo Grotius’s major forays into the law of nations, the just war doctrine provided the backbone of the argument. Between 1604 and 1606, Grotius prepared a treatise in defence of the capture of the Portuguese ship Santa Catarina in the Strait of Singapore by a fleet of the Dutch East India Company. In the text, which became known as De iure praedae commentarius upon its publication in 1868, Grotius refashioned the just war doctrine in order to argue that the captured ship and cargo were good prize in a just war. According to Grotius, this was the case regardless of whether one considered the Company an agent of the Dutch Republic in a war between states, or a private actor.

Perfect War: Alberico Gentili on the Use of Force and the Early Modern Law of Nations (Valentina Vadi)

Gentili’s conceptualization of war as a conflict between states attempted to limit the legitimacy of war to external wars only, thus precluding the legitimacy of civil wars. It reflected both the emergence of sovereign states and the vision of international law as a law among polities rather than individuals. The conceptualization of war as a dispute settlement mechanism among polities rather than a punishment for breach of the law of nations and the idea of the bilateral justice of war humanized the conduct of warfare and the content of peace treaties. The idea of perfect war excluded brigandage, piracy, and civil wars from its purview. Some scholars have suggested that perfect war had a dark side, legitimizing imperial expansion. Others have cautioned that Gentili explicitly opposed imperial expansion rather adopting anti-imperialist stances. This article suggests that these ambivalent readings of the Gentilian oeuvre reflect the ambivalence of the early modern law of nations. Under the early modern law of nations, aggression for the sake of empire was clearly unjust; nonetheless, imperial expansion took place. Whereas ‘a law which many transgress[ed] [wa]s nonetheless a law’, there was a wide divide between theory and practice

This article investigates the formal purpose of declaring wars for Hugo Grotius. Grotius was adamant that states always use justification in a duplicitous way to conceal their real motivation to go to war. As such, the purpose of declaration is not to assert the just cause of war. Rather, what any public declaration does, is provide recognition that confers legal validation to the disputing parties. The legal rules of war were described by the law of nations and occasionally permitted states to commit certain ‘war crimes’ with impunity. For Grotius, this was not a moral sanctioning of such crimes but rather a means to prevent the occurrence of wars, which such endless repudiations risked causing or exacerbating. Grotius’s concern for the effects of war is conspicuous; and recounting his maxim that war should always be a last resort, this article argues that declaration of war has a distinct moral purpose for Grotius. In fact, public declaration of war is, together with constraints on the conduct of war, a ‘principle of moderation’ Grotius insists should be upheld in times of war. Declaration of war gives the parties avenues to seek peace and reconciliation, and, therefore has a humanitarian purpose for Grotius by ultimately seeking to prevent the disparaging effects of war. Even in wars that do not demand a public declaration, such as those regulated by natural law such as punitive wars or defensive wars, Grotius cautions that declarations of war are advisable. The remaining lingering issue is how to engage with unlawful enemy combatants, such as pirates - a distinct problem that the international community still faces with increasing regularity. Grotius was certainly aware of the legal (and moral) consequences of recognising belligerency we cannot possible hope to build moral relations with, and, this article claims, ‘unlawful’ enemies ultimately demarcates the boundary of international society.

Centuries before being included in Hugo Grotius’s De iure belli ac pacis and De iure praedae, the subject of reprisal was already being discussed in medieval literature. The aim of this paper is to examine the medieval and early modern practice and theory of reprisal as it developed before and during Grotius’s lifetime. Its first part investigates a number of important foundational elements, such as the issues of definition and terminology, and the common characteristics of a reprisal case. In the second half, the author explores why reprisals were deemed to be a ‘perversus mos’ or ‘bad custom’ and how continued reliance on this practice was nonetheless justified by inserting it into the medieval just war doctrine. The paper does not provide a systematic study of Grotius’s own engagement with medieval reprisal sources. Rather, it should be read in conjunction with another publication in this same volume, ‘Grotius on Reprisal’ by Randall Lesaffer.

In neither of his two major forays into the laws of war and peace – De iure praedae or De iure belli ac pacis – did Hugo Grotius discuss the legal institutions of reprisal – whether special or general – or privateering in their own right. His profoundly novel reading of the just war doctrine in the context of his theory of natural rights, however, gave powerful legitimisation to the practices of special reprisals, as well as of privateering in times of war and of peace.

This article starts with a critical reflection on John Westlake’s reading of the history of empire and the English/British East India Company – for him, essentially, the proper concern of ‘constitutional history’ rather than international law. For Westlake, approaching this history through the prism of nineteenth-century positivist doctrine, the Company’s exercise of war powers could only result from state delegation. Against his warnings to international lawyers not to stray from the proper boundaries of international legal inquiry, the article proceeds to recover Hugo Grotius’s theory of corporate belligerency in his early treatise De iure praedae. For Grotius, corporations could wage public war on behalf of the state yet, at the same time, were in law capable of waging private war in their own right. The article proceeds to reflect on the practice of corporate belligerency in the centuries separating Westlake and Grotius; it concludes with observations on the implications of Grotius’s theory of corporate belligerency today

This paper explores the presence of late medieval ius commune in Grotius’s thought on the use of force in internal strife and war, based on De iure belli ac pacis (1625). To this end, it examines Grotius’s use of ius commune sources, and considers some similar sources, which he does not actually cite, but which relate to his discussion. By clarifying Grotius’s selection and use of ius commune sources, the paper intends to contribute to the achievement of a double aim: firstly, to determine the place of rebellion and civil war in De iure belli ac pacis, especially in relation to (external) war; and, secondly, to assess Grotius’s approach to the two former issues, particularly with regard to the criteria by which a distinction between rebellion and civil war can be drawn, and to the effects of this distinction.

A Prodigy Child of the Dutch Revolt: Immediate ‘Precursors’ to Grotius on Just Revolt (Raymond Kubben)

One of the odd things about Grotius’s thought is that he – advocate of a rebellious regime – was not very supportive of the right of resistance. Justifying the revolt at the time not only meant legitimizing the new regime he was serving; it also meant ruling out opposition against it. That posed an intricate puzzle; a puzzle Grotius solved by drawing on the theorizing on just revolt of the previous decades. This paper purports to show the connection between Grotius’s thought on just revolt and the intellectual and political environment in which Grotius came of age. It also sets out to show that the solution to the puzzle lies in the element of authority and the particular view taken on the constitutional position of the States in the Low Countries.

This article explores the writings of Hugo Grotius on the law of civil war. First, the article takes a look at what Grotius wrote about the Dutch revolt, the civil war during which he himself lived and which he helped to legitimise. Second, the article notes how in legal practice the Dutch revolt also provided a valuable early precedent for the later scholars of the law of civil war, who were more concerned with questions of revolutionary prize jurisdiction and the problem of recognition. Third, the article explores the elements relating to these questions of civil war in Grotius’s volitional law of nations as presented in De iure belli ac pacis. These provided Grotius’s most enduring legacy for the later scholars on the law of civil war.