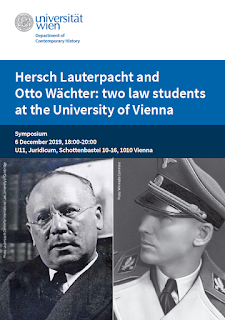 
In 1919, two men enrolled at the University of Vienna’s Faculty of Law and later went on to pursue very different careers. Hersch Lauterpacht became one of the most eminent scholars of international law in the 20th century, holding the famous Whewell Chair at the University of Cambridge and being a member of the International Law Commission and Judge at the International Court of Justice. Otto Wächter, on the other hand, rose to the upper ranks of the Nazi party. Wächter was involved as an illegal Nazi in the 1934 assassination of Dollfuss in Vienna, later became Governor of Krakow and then Lemberg, and went on to become a commander in the Waffen-SS Division Galicia. In Lemberg, Lauterpacht’s town of origin, Wächter was responsible for the administration of the Holocaust, in which large parts of Lauterpacht’s family perished. Lauterpacht was a prosecutor at the Nuremberg trials, while Wächter was indicted for international crimes. However, Wächter died in 1949 while on the run. The keynote speech by Philippe Sands will juxtapose these different life paths, based on his book East-West Street and his new project The Ratline.


Philippe Sands QC is Professor of Law at University College London and a practising barrister at Matrix Chambers. He appears as counsel before the ICJ and ICC and sits as an arbitrator at ICSID, the PCA and the CAS. He is author of Lawless World (2005) and Torture Team (2008) and several academic books on international law, and has contributed to the New York Review of Books, Vanity Fair, the Financial Times and The Guardian. East West Street: On the Origins of Crimes Against Humanity and Genocide (2016) won the 2016 Baillie Gifford (formerly Samuel Johnson) Prize, the 2017 British Book Awards Non-Fiction Book of the Year, and the 2018 Prix Montaigne. The sequel, The Ratline, will be published in 2020 and is also the subject of a BBC podcast. Sands is President of English PEN and a member of the Board of the Hay Festival.

The event takes place from 18:00 to 21:00. Register with rechtsgeschichte@univie.ac.at.