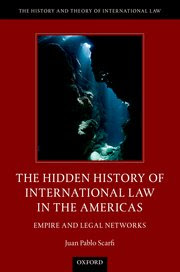 Juan Pablo Scarfi (University San Martín) is due to publish The Hidden History of International Law in the Americas: Empire and Legal Networks with OUP.


Juan Pablo Scarfi is a Research Associate at the Argentine National Scientific and Technical Research Council (CONICET), and teaches international relations and international law at the School of Politics and Government at the National University of San Martín, Argentina. He completed his PhD at the University of Cambridge in 2014. He was a Visiting Scholar at University College London (Institute of the Americas) and Columbia University, as well as a Postdoctoral Fellow at the Center for Intellectual History in the National University of Quilmes. He is the author of El imperio de la ley: James Brown Scott y la construcción de un orden jurídico interamericano (2014) and co-editor of Cooperation and Hegemony in US-Latin American Relations: Revisiting the Western Hemisphere Idea (2016).