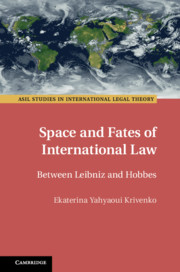 CUP is publishing a new book on the influence exercised by the concept of space on the emergence and continuing operation of international law.

Ekaterina Yahyaoui Krivenko is the current Chair of the Interest Group on International Legal Theory and Philosophy of the European Society of International Law. In 2016 she received NUI Galway President's award for research excellence. Her work critically examines theoretical underpinnings of international law and human rights.

2. Science and Law in the Seventeenth Century

4. The Idea of Universals and Human Cognition