BOOK: Agatha VERDEBOUT, Rewriting Histories of the Use of Force The Narrative of ‘Indifference' [Cambridge Studies in International and Comparative Law; 160] (Cambridge: CUP, 2021), ISBN 9781108937375 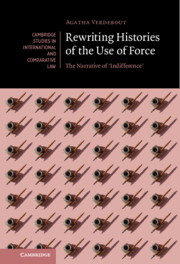 It is commonly taught that the prohibition of the use of force is an achievement of the twentieth century and that beforehand States were free to resort to the arms as they pleased. International law, the story goes, was 'indifferent' to the use of force. 'Reality' as it stems from historical sources, however, appears much more complex. Using tools of history, sociology, anthropology and social psychology, this monograph offers new insights into the history of the prohibition of the use of force in international law. Conducting in-depth analysis of nineteenth century doctrine and State practice, it paves the way for an alternative narrative on the prohibition of force, and seeks to understand the origins of international law's traditional account. In so doing, it also provides a more general reflection on how the discipline writes, rewrites and chooses to remember its own history.

Agatha Verdebout holds a PhD in Public International Law from the Université Libre de Bruxelles (ULB). Her main research interests lie in critical histories of international law and the use of force. She is the recipient of several prizes, awards and research grants, notably the 2017 Henri Rolin Prize.