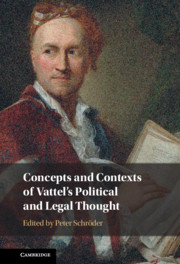 Swiss-born Emer de Vattel (1714–1767) was one of the last eminent thinkers of natural law. He shaped the later part of early-modern natural jurisprudence. At the time, the subject had become a fashionable academic sub-discipline in both jurisprudence and philosophy. Vattel's considerable impact on statesmen, political thinkers, diplomats and lawyers during his lifetime and after rested primarily on the fact that his The Law of Nations (1758) transformed natural law into the basis of a more comprehensive and practicable theory of interstate relations. His ideas served to promote reform programmes whose comprehensive natures spanned the domains of economic reform, constitutionalism and international diplomacy and foreign trade policy. Vattel's conception centred round the principle that defined all sovereign states as nations composed of societies of free men and profoundly influenced legal and political debates in the eighteenth and nineteenth centuries.