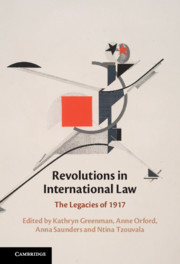 In 1917, the October Revolution and the adoption of the revolutionary Mexican Constitution shook the foundations of the international order in profound, unprecedented and lasting ways. These events posed fundamental challenges to international law, unsettling foundational concepts of property, statehood and non-intervention, and indeed the very nature of law itself. This collection asks what we might learn about international law from analysing how its various sub-fields have remembered, forgotten, imagined, incorporated, rejected or sought to manage the revolutions of 1917. It shows that those revolutions had wide-ranging repercussions for the development of laws relating to the use of force, intervention, human rights, investment, alien protection and state responsibility, and for the global economy subsequently enabled by international law and overseen by international institutions. The varied legacies of 1917 play an ongoing role in shaping political struggle in the form of international law.