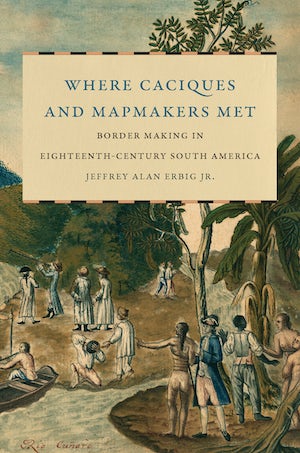 The University of North Carolina Press is publishing a new book on border making in 18th century South America.

During the late eighteenth century, Portugal and Spain sent joint mapping expeditions to draw a nearly 10,000-mile border between Brazil and Spanish South America. These boundary commissions were the largest ever sent to the Americas and coincided with broader imperial reforms enacted throughout the hemisphere. Where Caciques and Mapmakers Met considers what these efforts meant to Indigenous peoples whose lands the border crossed. Moving beyond common frameworks that assess mapped borders strictly via colonial law or Native sovereignty, it examines the interplay between imperial and Indigenous spatial imaginaries. What results is an intricate spatial history of border making in southeastern South America (present-day Argentina, Brazil, and Uruguay) with global implications.

Drawing upon manuscripts from over two dozen archives in seven countries, Jeffrey Erbig traces on-the-ground interactions between Ibero-American colonists, Jesuit and Guaraní mission-dwellers, and autonomous Indigenous peoples as they responded to ever-changing notions of territorial possession. It reveals that Native agents shaped when and where the border was drawn, and fused it to their own territorial claims. While mapmakers' assertions of Indigenous disappearance or subjugation shaped historiographical imaginations thereafter, Erbig reveals that the formation of a border was contingent upon Native engagement and authority.

Jeffrey Alan Erbig Jr. is assistant professor of Latin American and Latino studies at the University of California, Santa Cruz.