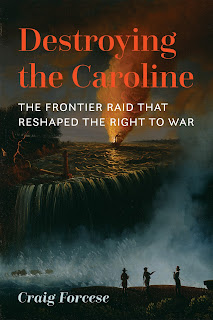 In the middle of night on 29 December 1837, Canadian militia commanded by a Royal Navy officer crossed the Niagara River to the United States and sank the Caroline, a steamboat being used by insurgents tied to the 1837 rebellion in Upper Canada. That incident, and the diplomatic understanding that settled it, have become shorthand in international law for the “inherent right to self-defence” exercised by states in far-off places and in different sorts of war. The Caroline is remembered today when drones kill terrorists and state leaders contemplate responses to threatening adversaries through military action.

But it is remembered by chance and not design, and often imperfectly.
This book tells the story of the Caroline affair and the colourful characters who populated it. Along the way, it highlights how the Caroline and claims of self-defence have been used — and misused — in response to modern challenges in international relations. It is the history of how a forgotten conflict on an unruly frontier has redefined the right to war.

Epilogue The Protagonists’ Fate
Appendix: Chain of Citations and Misunderstandings about the Caroline's Core Facts
List of Illustrations
Notes
Index