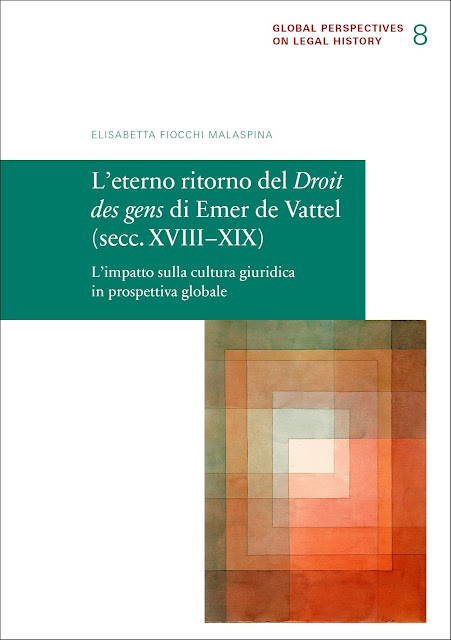 Global Perspectives on Legal History is a book series edited and published by the Max Planck Institute for European Legal History, Frankfurt am Main, Germany.
As its title suggests, the series is designed to advance the scholarly research of legal historians worldwide who seek to transcend the established boundaries of national legal scholarship that typically sets the focus on a single, dominant modus of normativity and law. The series aims to privilege studies dedicated to reconstructing the historical evolution of normativity from a global perspective.
It includes monographs, editions of sources, and collaborative works. All titles in the series are available both as premium print-on-demand and in the open-access format.
More information on the series and forthcoming volumes: http://global.rg.mpg.de

The numerous editions and early translations produced throughout the eighteenth century enabled the broad dissemination of Emer de Vattel’s juridical-political work Droit des gens. This book investigates the global impact of the Droit des gens with regard to the different political realities, the historical and legal contexts as well as the attempts, mechanisms and strategies used to put these ideas into practice and establish new doctrine between the eighteenth and nineteenth centuries.


The Droit des gens had an extremely diverse impact, owing to its varied reception in different political situations, historical and legal contexts, and attempts at practical and theoretical implementation. The fact that Vattel’s book was a point of reference for a considerable number of jurists and politicians further demonstrates its authority in the eighteenth and nineteenth centuries.
The question naturally arises whether the continuous references to the work may be regarded as «typical citations of style», simply confined to referencing Vattel’s thought, or whether they are a clear sign of a deeper significance; one springing directly from the characteristics of the Droit des gens, with its capacity to organise and regulate the State in its domestic and international relations.
The dissemination of the Droit des gens is reconstructed via a broad overview of the dynamics that actually underpinned the use of the treatise, ranging from its influence on political power in domestic and foreign affairs to its use as a guidebook for diplomats and consuls, and even its use as a teaching manual.
Co-existing in Vattel’s work are several topics—the legislative, the political and the social—which are developed independently of one another, yet are part of one unified framework. The book aims to bring together a study of the first publication in 1758 of Vattel’s Droit des gens, its constant interaction with subsequent editions, translations and annotated versions carried out by jurists in the 19th century its critical reception (both positive and negative) in relation to the more complex legislative contexts. The publishing history of the Droit des gens will be accompanied by the methodological aspect—closely bound to the need to write a global legal history—in which translation, in the broader sense of the term, plays a key role. Concepts of fashion and modernity are examined within the context of the practical and theoretical legal entanglements of the eighteenth and nineteenth centuries, thanks to the voices of distinguished jurists and politicians who made use of the Droit des gens and who translated and annotated it, thereby encouraging the assimilation—not always unadulterated—of Vattel’s thinking.