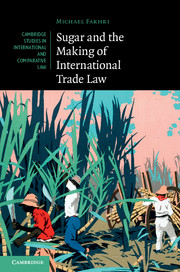 Michael Fakhri (Oregon) published a book on Sugar and the Making of International Trade Law (CUP, 2014).


This book traces the changing meanings of free trade over the past century through three sugar treaties and their concomitant institutions. The 1902 Brussels Convention is an example of how free trade buttressed the British Empire. The 1937 International Sugar Agreement is a story of how a group of Cubans renegotiated their state's colonial relationship with the US through free trade doctrine and the League of Nations. And the study of the 1977 International Sugar Agreement maps the world of international trade law through a plethora of institutions such as the ITO, UNCTAD, GATT and international commodity agreements – all against the backdrop of competing Third World agendas. Through a legal study of free trade ideas, interests and institutions, this book highlights how the line between the state and market, domestic and international, and public and private is always a matter of contest.