'Histories of Inclusion / Exclusion in International Law'
Last week (31/08/2022 - 01/09/2022), the IG History of International Law organized its preconference workshop preceding the ESIL Annual Conference in Utrecht. The call for papers can be retrieved via our blog. One of the IG conveners, Jaanika Erne (Tartu), has been so kind as to provide us with a personal account of two exciting days:

Panel 1: In / Exclusion in international law through the lens of literature and gender

We heard three excellent presentations, followed by insightful comments and questions from the audience, chaired by IG convener, Florenz Volkaert:

1. Anastasia Hammerschmied (Universität Wien), “Wartime Sexual Violence in 19th Century International Law” on an aspect of prohibition of sexual violence in armed conflict under international law from 1870 to 1914 against women, in the light of, on the one hand, the international law institute of sources (and the related problems: fragmentation and indeterminacy) - to get to interpretation; and on the other hand, politicization - the problem of ideas and what constitutes ideas for society or for different levels of society.

The paper focused on the linear historical trajectory of international criminal law but also made clear that there exists a non-linear perspective besides the historical linearity, to which the author tries to get closer by using a Law and Literature approach.

In order to illustrate the Law and Literature approach, Schrotter has used the book “Waiting for Hitler: Voices from Britain on the Brink of Invasion”, which book refers to the personal diaries of the people who lived in 1940s Britain under the threat of German invasion.

Reading the abstract, at the first sight (as a member of the Coordinating Committee) I was sceptical about this Paper because it was not clear to me, whether the area of fiction (with part H within it) could be filled with only one book compiled by only one author’s subjective account? But it actually can, depending on the reach and general acceptance of the ideas in such a book. Legal fiction is generated through imagination. The key is to find a powerful denominator that could touch everyone: for example, Hitler. So, literature adds power to any (legal) decision, while literature has the potential to cultivate a critical conscience (abstract characterizations of law). This can be connected with psychology which teaches us that we can only see the materialization from the outside but not the inner processes that drive it.

I understood that this Paper, talking of “the spirits of the drafters - divine in their intuitions …”, is a perfect example of what happens if the fiction part in judgments goes wrong!

Reading the paper, I was reminded of Louis Althusser’s ideology division into, on the one hand, public ideology as State ideology, community ideology including also the ideology of masses shaped by state media, and individual ideology on the other hand, although the latter has always been shaped by control. The main focus, therefore, is on the relationship between state and individual.

As an example, the paper brings in the dimensions of Christianity vs. Paganism and polytheism, as well as the opposition of civilized vs. non-civilized as illustrations of the forms of censorship.

So, the historicization of witchcraft illustrates the problem already articulated - a judgment based on the values in society because the judge is a product of the society (e.g.: has attended school, listens to the news, music, etc.)

During the vivid discussion following the presentation was pointed out that there is also the other side - a judgment based on the overall intelligence of the judge shapes the society as such judgment says what society is about.

Panel 2: In / Exclusion in the history of international law and capitalism

1. Matheus Gobbato Leichtweis, Universidad Federal do Rio Grande do Sul, Law, ideology and capitalist reason: the violence of abstraction as a mechanism of exclusion/inclusion in international law

2. Florenz Volkaert, Ghent University, Treaties of commerce and the most-favored-nation clause in late 19th- and early 20th-century legal doctrine: a tool for economic and/or civilizational in / exclusion?

Panel 3: In / Exclusion of culture and minorities in the history of international law

Panel 4: In / Exclusion in the history of international investment law

1. Matheus Gobbato Leichtweis (Universidad Federal do Rio Grande do Sul) talked about law, ideology and capitalist reason - the violence of abstraction as a mechanism of exclusion/inclusion in international law.

The presentation continued our yesterday’s discussions concerning the dilemma of, on the one hand, free thought, and on the other hand, the suppression of fiction or free thought. While in theory international law is anarchical by nature, the reference to Indians brings in a dilemma between Might and Right. So, does Might make Right? This understanding was substituted by the League of Nations and the United Nations, and these technologies of governance are based on pragmatism, while the content of that pragmatism is decided during deliberation between state representatives. Can we talk about the “free will” of state representatives or are they dependent on the systems that were created before them, like money, the banking system, adjudication system (the latter based on the Roman understanding that the winner is s/he who knows a certain formula, not the Truth.)

So, we received an overview of the step-by-step development of the concept of governance, structurally connected with capitalist social relations. The author refers to Marx in his explanation: people enter into relationships because the conditions of production necessitate them. He also refers amongst other things the understanding by Ntina Tzouvala of “capitalism as civilisation” uncovering the argumentative mechanisms through which the logics of inclusion and exclusion operate in international law, while Ntina Tzouvala shows how legal argumentation has shaped the civilisation into what it is.

The author has been historicizing the Politics of Interpretation: the exclusion/inclusion of cultural context through legal interpretation, concerning his book project based on his Ph.D. dissertation (forthcoming in OUP) about the intellectual history of the New Haven School that Derrig uses for entry to the field of post-war American international law scholarship. Derrig pointed to the two basic claims that the New Haven School could help see about the field:

2) when one places this anti-formalist legal method in a historical context, one might see that legal interpretation has been conditioned by the political cultures in which it operates.

The 1968 UN Conference discussed ILC’s Draft Articles on the interpretation of treaties that became Articles 31 and 32 VCLT. McDougal attacked the formalized hierarchy established by the Draft Articles and suggested a new version of those Articles.

What to initially take from this Paper? One potential takeaway is that there are no fixed or natural meanings of words that the parties could not alter – leading into the idea of progressive international law based on Harold Lasswell’s neo-Freudian Social Theory and social critique based on that theory.

The paper talked about the hegemonic narrative and double standards that still remain. Elizabeth Craig was also referring to the need for contextualizing in order to understand better. Her conclusion is that the politics of law are unavoidable.

Yanweng Zhang demonstrated high-level competencies and skills of analysis throughout her presentation and the preceding and following discussions. The paper points to the diversity of definitions concerning geography and gender in the arbitration system. Her remarks were followed by a vivid discussion on the questions concerning the need for a more permanent court of arbitration, i.e., internationalization of commerce.

The convenors would like to thank all speakers and attendants for their participation, interest and enthusiasm. We hope to see you again at our next workshop!
Markus Beham - John Morss - Jaanika Erne - Florenz Volkaert 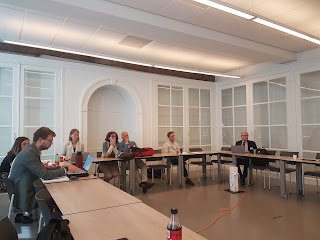 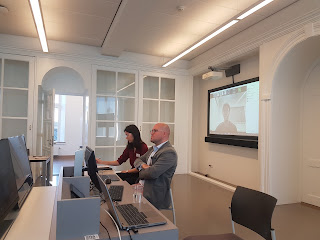 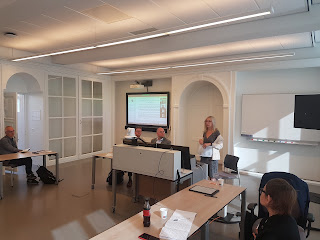 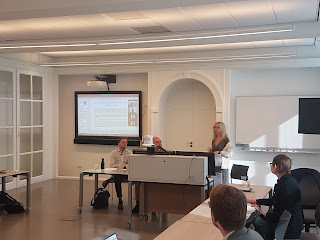 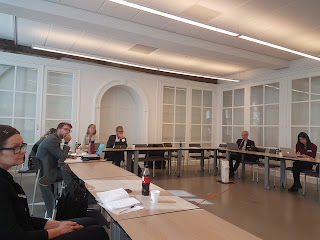 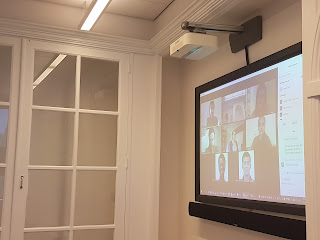 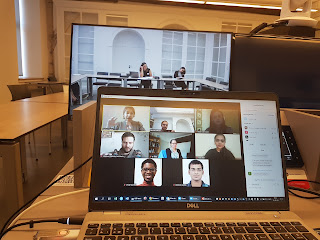