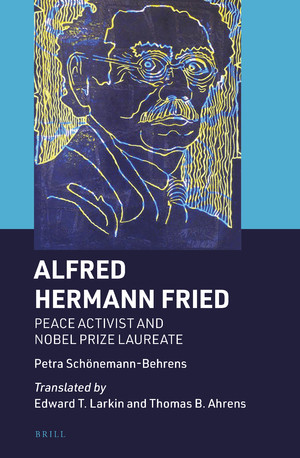 Petra Schönemann-Behrens provides an informative review of the life and times of Alfred H. Fried (1864-1921), a significant if underappreciated German pacifist of the late nineteenth century and early twentieth century. In response to the militarism and international anarchy of the European states, Fried developed his unique notion of “revolutionary” or “scientific” pacifism, differentiating it from reform pacifism, in order to address the material causes of war. As theorist, practitioner, and journalist, Fried advanced radical ideas at the time: the formation of a pan-European union, the establishment of an effective international court of arbitration, the elimination of a secretive diplomatic class, and the expansion of international economic and cultural cooperation.

This book is a translation of the German biography Alfred H. Fried: Friedensaktivist–Nobelpreisträger, published by Römerhof Verlag in 2011, and commemorates the 100th anniversary of Fried’s death.

ABOUT THE AUTHOR AND TRANSLATORS

Petra Schönemann-Behrens, Dr. phil. (2004), is a teacher of history, ethics and German at Gymnasium Wildeshausen near Oldenburg, Germany. She has published articles on historical peace research, mainly on A. H. Fried, and contributed to various radio and TV programs on this topic. Edward T. Larkin, Ph.D. (1986), is Professor Emeritus of German at the University of New Hampshire (USA). In addition to having published numerous articles on major German and Austrian authors, he has also published six book-length translations. Thomas B. Ahrens, Ph.D. (1998), is Director of Convocations at Berea College (USA). A long-time college educator and academic author, he has published translations of Austrian authors in the refereed online journal No Man’s Land as well as two novels.