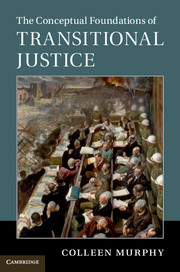 
Many countries have attempted to transition to democracy following conflict or repression, but the basic meaning of transitional justice remains hotly contested. In this book, Colleen Murphy analyses transitional justice - showing how it is distinguished from retributive, corrective, and distributive justice - and outlines the ethical standards which societies attempting to democratize should follow. She argues that transitional justice involves the just pursuit of societal transformation. Such transformation requires political reconciliation, which in turn has a complex set of institutional and interpersonal requirements including the rule of law. She shows how societal transformation is also influenced by the moral claims of victims and the demands of perpetrators, and how justice processes can fail to be just by failing to foster this transformation or by not treating victims and perpetrators fairly. Her book will be accessible and enlightening for philosophers, political and social scientists, policy analysts, and legal and human rights scholars and activists.


Colleen Murphy is Associate Professor of Philosophy at the University of Illinois, Urbana-Champaign.